The state of Washington plans to sue the Trump administration over its proposal to dismantle pollution rules that would have increased federal regulation of emissions from coal-fired power plants, Gov. Jay Inslee said Wednesday.

Seven decades after making key portions of the atomic bomb dropped on Nagasaki, Japan, workers at the Hanford Nuclear Reservation are being exposed to radiation as they tear down buildings that helped create the nation's nuclear arsenal.

14 states sue to allege US failure to enforce smog rules

Fourteen states and the District of Columbia announced Thursday that they are suing the Trump administration over what they say is a failure to enforce smog standards.

PENN COVE, Wash. – Cookie tray in hand and lifejacket around chest, Laura Newcomb looks more like a confused baker than a marine biologist. But the University of Washington researcher is dressed for work.

Her job: Testing how mussels in this idyllic bay, home to the nation's largest harvester of mussels, are affected by changing ocean conditions, especially warmer and more acidic waters. It's a question critical to the future of mussel farmers in the region. More important, it's key to understanding whether climate change threatens mussels around the world, as well as to the food chains mussels support and protect in the wild.

"Along the West Coast, mussels are well-known ecosystem engineers," said Bruce Menge, an Oregon State University researcher who studies how climate impacts coastal ecosystems. "They provide habitat for dozens of species, they provide food for many predators and occupy a large amount of space, so are truly a 'dominant' species."

Breaking with 20 million years of tradition 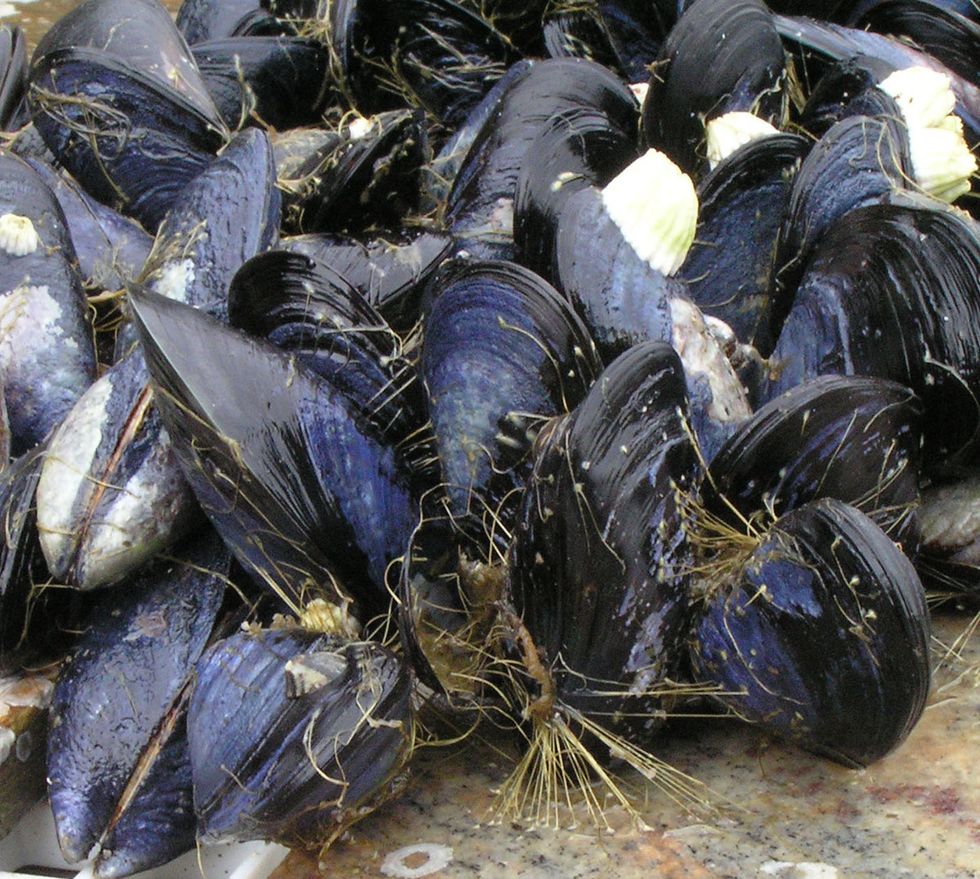 In the case of mussels, an earlier University of Washington lab study found that increased carbon dioxide weakens the sticky fibers, called byssus, that mussels use to survive by clinging to objects like shorelines or the ropes used by commercial harvesters.

"If byssal thread weakening does eventually become important," Menge added, "the consequences would be major if not catastrophic."

Newcomb's goal now is to apply in the real world what was learned in the lab. "Instead of spending a lot of time tightly controlling the temperature and pH conditions mussels grow in, I use the natural seasonal variation to try to answer the same questions," Newcomb said.

Newcomb's field office is the rear deck of a harvesting boat -- right between the toilet and the microwave. The quarters are cramped, but the view is grand: The blue waters of Penn Cove on Washington state's Whidbey Island are set against rolling bluffs and snow-capped mountains.

The University of Washington marine biologist is there courtesy of Penn Cove Shellfish, which is also the oldest and best known mussel operation in the United States. If you're a mussel fan, you've probably had a few – they're sold at Costco as well as upscale restaurants across the country.

Placing just-harvested mussels on her tray, Newcomb samples for size, thickness and strength. The mussels are grown on 21-foot-long ropes hanging from several dozen rafts in the bay, and Newcomb takes samples from two depths: Three feet and 21 feet. She also samples water temperature and pH levels at those depths. 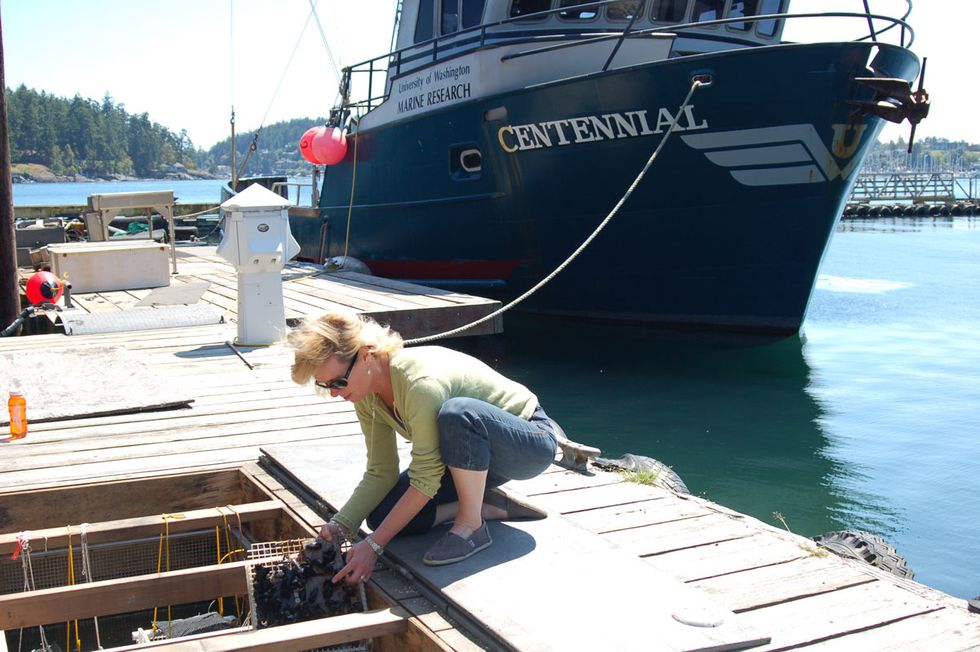 Prior to the Industrial Revolution and the explosion of manmade CO2, ocean pH averaged 8.2. Today it's 8.1, a 30 percent increase in acidity on the logarithmic scale. Computer models peg ocean acidity at 7.8 to 7.7 by the end of the century at the current rate of greenhouse gas emissions.

Washington state is a bit ahead of that curve because ancient carbon stores in the deep ocean are periodically churned up by local currents.

The surprising lab discovery was that mussel byssus weakened by 40 percent when exposed to a pH of 7.5.

At Penn Cove, low pH levels are not uncommon – Newcomb has even seen 7.4 in the year that she's been sampling.

"We're worried they're going to see it more frequently," said Emily Carrington, Newcomb's graduate adviser and leader of the University of Washington team that published the earlier lab results.

The Penn Cove work follows well-publicized research that show oyster larvae in hatcheries along Washington's coast are having trouble forming shells because of the acidic waters.

"Mussels are the new oysters," Carrington said. But there's a twist: Mussels confirm that ocean acidification's impact extends in mollusks beyond an inability to form a shell.

The lab finding is "part of a growing body of evidence that ocean acidification alone and combined with other stressors will have effects beyond shell mineralization," said Terrie Klinger, a University of Washington marine sciences professor studying the impacts of acidification. 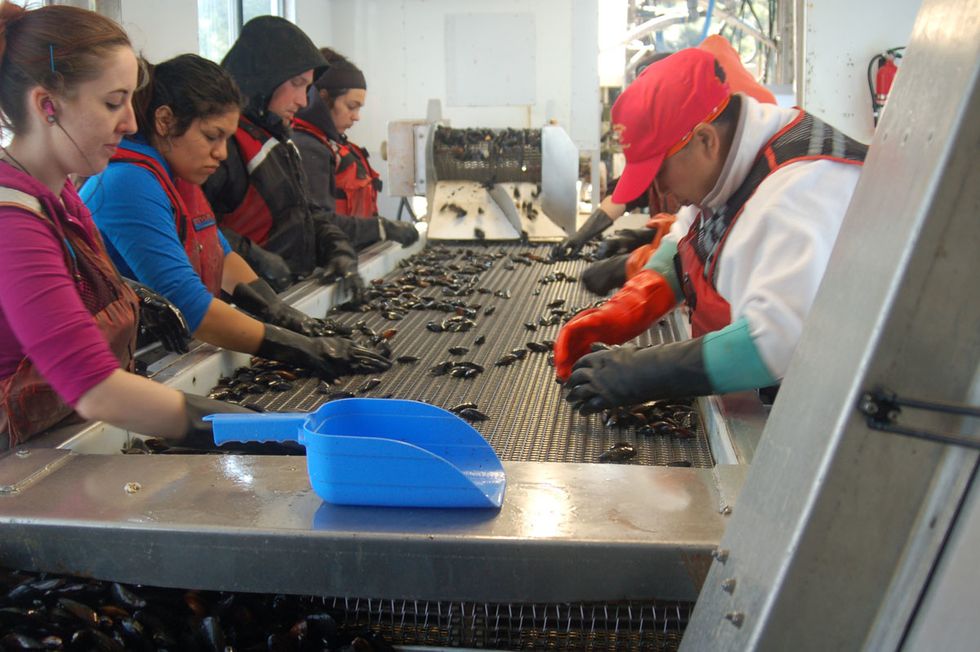 Penn Cove Shellfish and the UW researchers joined forces after company harvesters saw empty patches on some cultivation ropes that should have had mussels. Was that due to weakened byssus?

"We had a significant amount two years ago, and little bit less last year," said Ian Jefferds, general manager at Penn Cove Shellfish. "The question arose, 'Was there something related to that?'"

The concern about what the industry calls "slough-off" goes well beyond Penn Cove.

"We know that mussel slough-off has periodically been an issue but we don't know why," said Margaret Barrette, director of the Pacific Coast Shellfish Growers Association.

It's a global issue. Among major shellfish producers, New Zealand is creating an acidification monitoring network while researchers in Spain are planning a study similar to that in Penn Cove.

And across the Mediterranean, mussel farmers have reported problems. "A great majority of producers experienced important difficulties in past years as a consequence of summer heat waves," said Luis Rodrigues, a researcher with a European Commission panel studying acidification.

Those issues include slough-off in Italy and Montenegro, as well as thinning of shells and even die-offs in waters that topped 82.4 degrees F.

That team also "observed a very clear impact of acidification on the capacity of mussels to produce their byssal thread," noted Gazeau. "At low pH, it was very easy to pick up mussels individually; they could not attach themselves anymore." 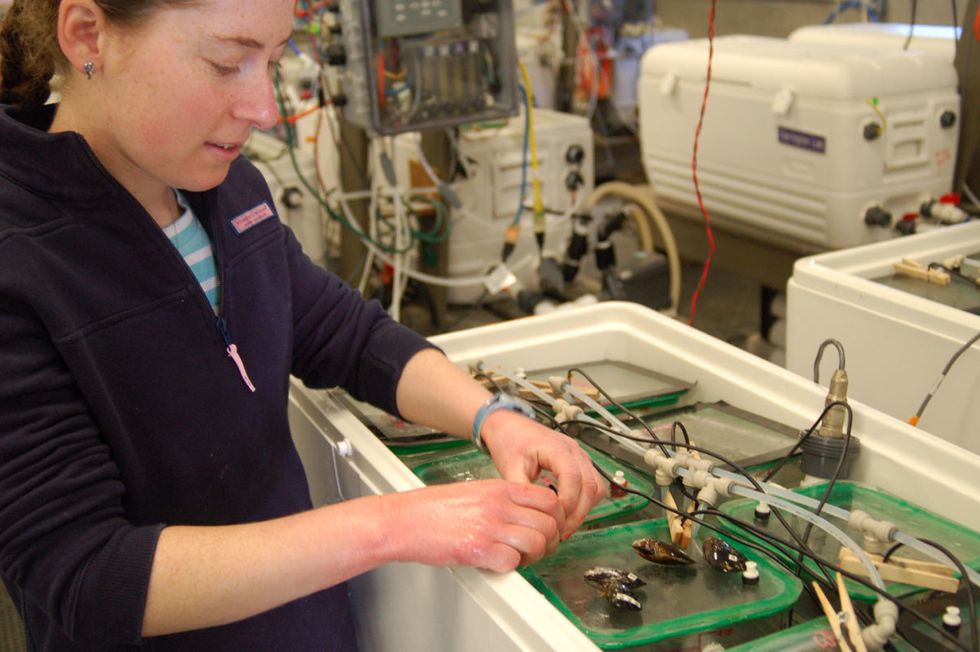 Of course, it's not just loss on the farms that worry scientists. In the wild, mussels form vast beds along coastlines, and some areas have seen slough-off as well.

"It's quite common in California in recent years," said Herb Waite, a University of California, Santa Barbara, biochemist who studies mussels. "A favorite collecting spot will suddenly disappear."

Any widespread slough-off in the wild could have other repercussions as well. It hasn't happened yet, but researchers are worried.

Mussel beds in sandy areas "stabilize shores against erosion," Waite noted, and any loss there could expose beaches to the erosive power of waves.

Carrington thinks her team's research could lead to an "early warning system" for a global mussel farming sector valued at $1.5 billion a year. Establishing pH thresholds, farmers could better monitor areas and, if needed, seek out safe havens in less acidic and cooler waters.

"It does matter where in the water mussels are," Newcomb added, noting that even preliminary results suggest growing them closer to the surface tends to mean less acidity. However, a trade-off there can be warmer temperatures.

The research will need two more years of data gathering before any definitive conclusions, but Carrington said the earlier lab tests underscore the need for field data.

"Would you be worried about being weakened by 40 percent?" she asked. "I would be."

Miguel Llanos is a freelance reporter based in the Pacific Northwest.

Systems-thinker John Harte gives a roadmap on how we can use the same interconnectedness that is spurring catastrophe to instead promote health and sustainability.

Coronavirus, climate change, and the environment

A conversation on COVID-19 with the director of Harvard University's Center of Climate, Health and the Global Environment.

The COVID-19 pandemic is bringing environmental destruction and the deterioration of social and cultural systems into sharp focus. But we can learn from this.

Big-picture thinker Nate Hagens on the opportunities and constraints we face confronting coronavirus. His advice: Find your better self and play a role.

Heroes of another kind

Covid-19 has made heroes out of millions of healthcare workers. Here are a few reporters that have earned our thanks, too.